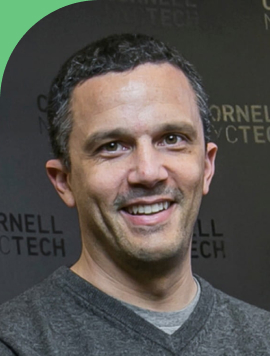 Serge Belongie received a B.S. (with honor) in EE from Caltech in 1995 and a Ph.D. in EECS from Berkeley in 2000. While at Berkeley, his research was supported by an NSF Graduate Research Fellowship. From 2001-2013 he was a professor in the Department of Computer Science and Engineering at University of California, San Diego.

He is currently the Professor at DIKU and Director of the Pioneer Centre for AI. Previously he was Andrew H. and Ann R. Tisch Professor in the Department of Computer Science at Cornell University and an Associate Dean at Cornell Tech. His research interests include Computer Vision, Machine Learning, Crowdsourcing and Human-in-the-Loop Computing. He is also a co-founder of several companies including Digital Persona, Anchovi Labs and Orpix. He is a recipient of the NSF CAREER Award, the Alfred P. Sloan Research Fellowship, the MIT Technology Review “Innovators Under 35” Award and the Helmholtz Prize for fundamental contributions in Computer Vision.